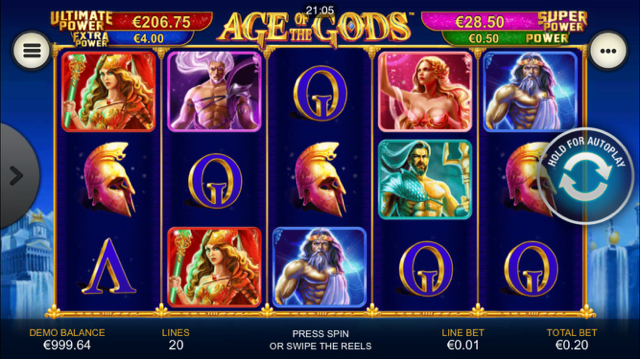 Having profoundly altered the progressive jackpot landscape with their Marvel slot series, Playtech are back to electrify the mobile slots industry once more with their new Age Of The Gods slot machine franchise.

Arriving like a bolt from the heavens, the first, self-titled instalment of the series features a traditional Greek mythological theme that sees Athena, Hercules, Poseidon, Zeus and Hera all appear on its reels. Should these five powerful deities line-up consecutively on any of the game’s 25 paylines, players will unleash the Pantheon of Power bonus and receive a reward of 10x their stake.

On top of this, the game also boasts a potentially unlimited number of free spins that benefit from a variety of unique modifiers and random access to the four Age Of The Gods slot progressive jackpot prizes – a hugely impressive selection of features given the slot can be played from as little as £0.20.

By The Power Of Zeus

When addressing the bonuses on offer in Age Of The Gods slot, the only place to start are the titular progressive jackpot prizes. During any base game spin at any stake level, players can be transported to a new screen where 20 gold coins are displayed. Here, they’ll have to click coins until three matching icons have been unveiled, with the Ultimate Power Jackpot paying out a seven figure win.

Beyond that, there’s also the Age Of The Gods Bonus where three of the game’s logos appearing anywhere on the reels will also take players to a screen decorated with 20 symbols. Here again they’ll have to click icons until three matching deities have been uncovered, with each one awarding nine free spins and a modifier that could be anything from a random multiplier to expanding wilds.

What’s more, when their free spins have been used up, players will be returned to the original screen and can start picking again, with the feature only ending when Hades is revealed. As such, they can gain a potentially unlimited number of bonus games and earn some truly god-like payouts.

King Of The Mountain?

As a collection of jackpot slots, Age Of The Gods really has set the standard for the industry; and the first instalment of the series remains one of the best due to its awe-inspiring selection of features.

You can also play the Age Of The Gods slot machine at these mobile slots sites: