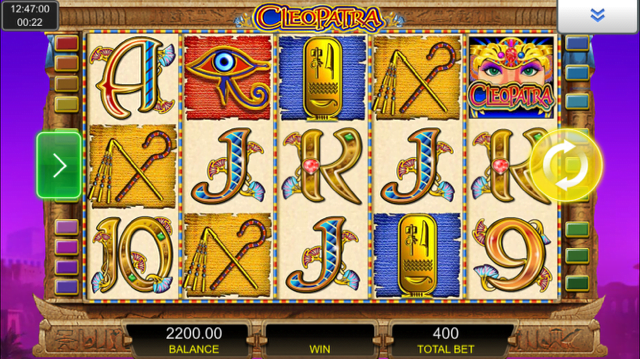 While the Ancient Egyptian slot genre may be one of the most crowded markets in existence, IGT’s Cleopatra slot machine was certainly a trailblazer when it made the transition from live casinos to our screens.

Having since established itself as one of the most popular video slots of all time, this simple five-reel, 20-adjustable payline title provided a blueprint that has been recreated by many software developers since. Adhering to the fundamental gameplay aspects of substitute wilds, prize multipliers and stackable free spins, the game still retains a cult following even among modern fans.

Featuring a colourful cast of Egyptian-style icons on its reels that include the Eye of Horus, a scarab beetle and the titular queen herself, Cleopatra would be a cliché were it not for the fact that the slot was one of the first to use each of these much-copied symbols. Playable from as little as £0.01 across all desktop, mobile and tablet devices, the game is an important part of any player’s slot education.

Secrets Of The Pharaohs

As touched on above, the Cleopatra slot is an incredibly basic slot that relies on tried and tested gameplay aspects to provide its prize punch. The main bonus feature on offer is a free spins game that is triggered whenever three or more pharaoh scatter symbols appear on the board, with this initially awarding a cash prize of 5-100x players’ total bet depending on the number of icons that feature.

Once this sum has been paid out, players will receive 15 free spins during which the value of all payline wins will be trebled. An increasingly dramatic piece of music will play as the reels spin faster, with three subsequent pharaoh symbols retriggering the feature up to a maximum of 180 free spins.

During both the free spins feature and the base game, any wins that are created with the help of one or more Cleopatra substitute wilds will also be doubled in value, with this bonus combining nicely with the 3x multiplier on offer in the former to create wins that can be worth 6x their stated value.

While the Cleopatra slot doesn’t offer much in the way of modern thrills, it’s still an important piece of video slot history and is well worth a spin before players take on IGT’s new and improved Cleopatra Plus.

You can also play the Cleopatra slot machine at these mobile slots sites: