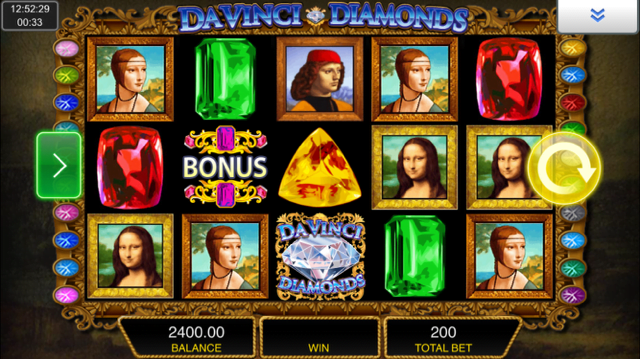 While any video slot player worth their salt will be aware of the concept of Tumbling Reels and their various equivalents, not many will know one of the first games to use them was the Da Vinci Diamonds slot machine.

A five-reel, 20-payline title from IGT, the game brought the block-busting concept into the mainstream with payline combinations that disappeared only to be filled by new symbols tumbling from above. These symbols in turn had the potential to complete additional wins, with players able to string together lengthy winning sequences and secure themselves potentially astronomical prizes.

Playable from as little as £0.20 per spin on all desktop, mobile and tablet devices, the Da Vinci Diamonds slot features a Renaissance theme, with fine art portraits and a selection of precious stones used as its unique icons. Also featuring substitute wilds and a bonus icon that can be used to trigger free games, the slot offers just about enough to make up for its plain black background and dated sound effects.

The Art Of Winning

While the Tumbling Reels themselves will feel like a feature to any player who has not encountered them before, the real meat of the Da Vinci Diamonds slot lies in a free spins feature that is triggered whenever three or more bonus icons appear on a valid payline starting from the left-most column.

Initially this will award six bonus games, but three or more subsequent bonus symbols appearing in any position on the reels will now trigger anywhere from two to 15 additional spins depending on the number of icons that feature. As they are now effectively scatter symbols, these bonus icons will ensure that it’s fairly easy to prolong the feature; with a maximum of 300 free spins up for grabs.

What’s more, the reels used during the bonus games will now include a different set of higher-value icons, with all portrait symbols now acting as scatters to improve your chances of winning. This also has a knock-on effect on the likelihood of stringing together lengthy combination wins, as the Tumbling Reels will now be far easier to trigger, with multiple paylines likely on any given free spin.

Diamond In The Rough?

Although it’s an art-themed video slot, Da Vinci Diamonds isn’t particularly easy on the eye; but while its visuals and sounds are starting to show their age, the gameplay has stood the test of time.

You can also play the Da Vinci Diamonds slot machine at these mobile slots sites: