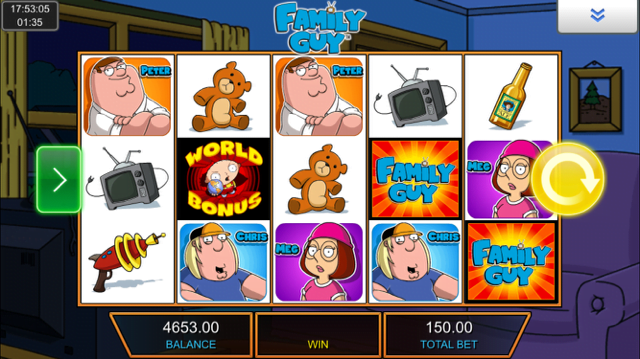 Based on the popular US cartoon series created by Seth McFarlane, IGT’s outstanding Family Guy slot machine is an absolute must-play title for any fans of gross-out humour and visually-engaging bonus features.

Though seemingly a conventional five-reel, 30-payline title at first glance, once you scratch beneath the surface you’ll soon discover that the Family Guy slot is positively loaded with quirky extras that make it far more immersive than your standard slot fare. First and foremost, the game boasts an entirely unique line-up of symbols that includes all your favourite characters and some iconic “props” from the show.

Beyond that, the game also features a range of hilarious soundbites – some taken from the series, some recorded specifically for the slot – and all line wins and bonus features are greeted with an animated video clip. Playable from as little as £0.50 across all desktop, mobile and tablet devices, the game boasts a maximum jackpot of 500x – but there’s plenty more up for grabs in the bonus rounds.

While the slot’s graphics, animations and sounds will certainly strike a chord with all fans of the show, the star attraction in the Family Guy slot is undoubtedly the World Bonus round. Triggered by landing scatter symbols on reels two, three and four, this will transport players to Stewie Griffin’s bedroom, where they’ll have to use their mouse to spin a globe and randomly trigger one of three awesome bonuses.

The Drunken Clam bonus sees players pick a character and slam beers until they pass out to earn cash prizes, the Chicken Fight sees Peter Griffin take on his feathered nemesis over three rounds in a fun pick and click game and the Lois’ Hot Free Spins bonus sees players receive 10 bonus games on a new set of reels where they can collect heart symbols to turn an increasing number of symbols into wilds.

On top of that trio of main features, Family Guy also boasts a selection of random in-reel bonuses that represent four of the main characters in the show. Peter can fart on the reels to award a prize of up to 5,000x, Stewie can add up to three wild symbols to a column, Lois can select up to three symbols to become instant wins and Brian can enable players to trigger the World Bonus with just two scatters.

As you can see, the Family Guy slot is an IGT title packed with enough quirky features to ensure that even mobile slots players who are entirely unfamiliar with the show have a good reason to stick around for a few spins.

You can also play the Family Guy slot machine at these mobile slots sites: