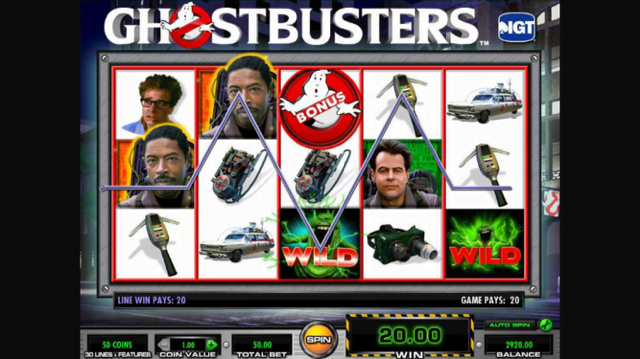 If you ain’t afraid of no ghost, now’s the time to put your money where your mouth is and join Peter, Ray, Egon and Winston on the hunt for ectoplasmic entities in IGT’s fully-licensed Ghostbusters slot machine.

A five-reel, 30-payline title, Ghostbusters features all your favourite characters from the hit 1984 comedy on its gameboard, with the whole gang appearing alongside Ecto-1, a proton pack, a ghost trap and a set of goggles as the slot’s unique icons. The game also features a handful of clips from the movie and a range of unique sound bites that have been specifically recorded to score your wins.

Playable from as little as £0.30 per spin – a stake that both covers the slot’s 30 paylines and pays for its plethora of bonus features – the game offers four in-reel bonuses that can occur after any spin and also provides players with access to two unique features where huge payouts are up for grabs.

Dealing with the in-reel bonuses first, at the end of any base game spin that doesn’t trigger one of the slot’s two main features, players can benefit from one of four great modifiers. These incentives include between one and four wilds being randomly added, between one and three reels being slimed and turning wild, a 2-5x multiplier being applied or a win of up to 1,000 coins being awarded.

While these bonuses are a great way to keep your base game winnings ticking over, they pale in comparison to the slot’s two designated features. Triggered whenever two Ghostbusters logos followed by either a Slimer or a Mr Stay Puft icon appear on the three central reels, players will either be granted access to the Ballroom Busters Bonus or the exciting Stay Puft Free Spins feature.

The first requires players to fire proton shots at objects to uncover one of six ghosts, with cash prizes being awarded whenever a target is hit. The second, however, grants players eight free spins with additional wilds being added to the gameboard. What’s more, at the end of each game, a selection of marshmallows will tumble down from above to freeze wilds in place and award additional prizes.

A must-play title for any fans of the original movie, the Ghostbusters slot is a game that is positively bursting with bonus features and offers a theoretical RTP stat that can rise as high as 94.50% if you’re lucky.

You can also play the Ghostbusters slot machine at these mobile slots sites: