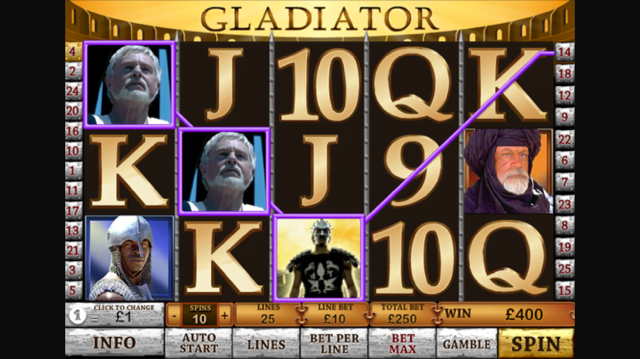 Having long since established itself as one of the most iconic Hollywood films in living memory, it’s only fitting that Playtech have given the Gladiator slot machine a makeover that’s every bit as breathtaking.

A five-reel, 25-adjustable payline title, Gladiator not only features a wide range of characters from the movie it’s based on as unique symbols, but also uses actual video clips from the film to greet its winning paylines and bonus features. This naturally makes for a hugely engaging user experience, with the game’s blockbuster atmosphere being further enhanced by a suitably dramatic soundtrack.

Playable from as little as £0.01 per spin across all desktop, mobile and tablet devices, the Gladiator slot is capable of paying out a top award of 5,000x players’ line bet and also boasts a potentially lucrative free spins feature in which mobile slots players can earn up to 24 bonus games with a healthy 3x prize multiplier.

Are You Not Entertained?

Before we get into the free spins feature – which is undoubtedly the more complex of Gladiator’s two bonuses – we should first explain the how the Gladiator feature works. Activated whenever helmet symbols appear on reels two, three and four, players will be presented with a random array of nine masks in bronze, silver or gold – with each metal awarding a progressively better cash prize.

The Coliseum Bonus, meanwhile, is activated whenever three or more scatter symbols appear anywhere on the gameboard. When this happens, players will be transported to a new screen where they’ll have to pick from a selection of stones to reveal prizes. The stones themselves are divided into four rows, with each row containing a different prize type from bonus games to extra wild icons.

While the Gladiator slot is a hugely engaging slot in its own right, we’d strongly recommend players seek out the jackpot version of the same game so that they can put themselves in the frame for huge prizes.

You can also play the Gladiator slot machine at these mobile slots sites: