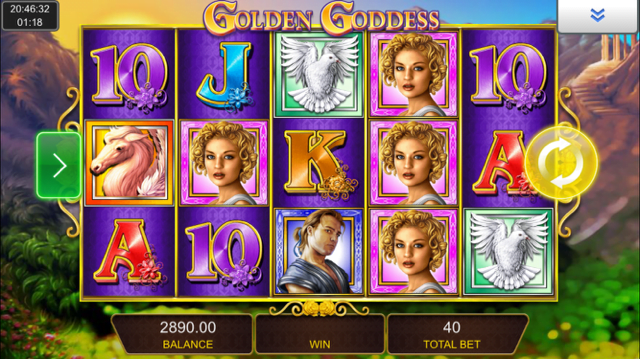 Travel back to Ancient Greece in IGT’s Golden Goddess slot machine – a hugely popular mobile title that dazzles players with gorgeous graphics and breathtaking sound as they spin their way to otherworldly wins.

Relying on a simple concept to deliver its big payouts, Golden Goddess foregoes the usual array of complicated bonus features in favour of utilising Super Stacked symbols across its base game reels. At the start of each spin, one icon will be randomly chosen to occupy all of the game’s Super Stack positions, with this creating the possibility of the entire gameboard being filled by a single symbol.

Smaller payouts are provided by the conventional ace-through-ten playing card values, but if players are fortunate enough to land the dove, horse, prince or Goddess as their Super Stack symbol, the game is capable of paying out up to 50x their line bet. While that may not sound like much to begin with, the slot’s 40 paylines ensure there’s a top prize of 2,000 coins up for grabs on any given turn.

Available to play from as little as £0.40 across all desktop, mobile and tablet devices, the Golden Goddess slot also benefits from a free spins feature that is triggered whenever special rose symbols occupy the game’s three central reels. While this won’t happen all that often, when it does players can expect to land some truly colossal wins thanks to only the high value icons being Super Stacked.

At the start of the bonus, players will be asked to pick a rose to uncover one of the slot’s four most rewarding symbols. They’ll then receive seven free spins with their chosen icon being added to an increased number of Super Stack positions, with this virtually guaranteeing a series of big-money payouts and boosting the game’s theoretical Return To Player statistic to an impressive 96 percent.

Although this feature cannot be re-triggered, the potential winnings on offer will more than make up for this fact and should easily tide players over until the next time they manage to land free spins.

Although it lacks the bells and whistles found in other IGT slots, the Golden Goddess slot takes a simple concept and executes it perfectly to provide players with an exhilarating experience on every spin.

You can also play the Golden Goddess slot machine at these mobile slots sites: