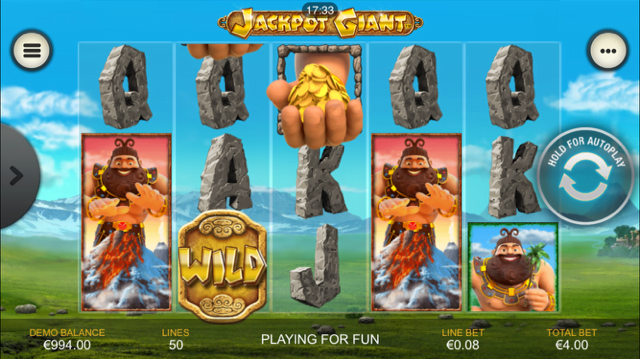 While many progressive jackpot slots are skewed in the favour of those with bottomless pockets, Playtech’s Jackpot Giant slot machine aims to restore a sense of balance with its low maximum bet threshold.

Although technically playable for £0.50 per spin, if players are willing to up their total wager to £4.00 – a sum that works out to be as little as £0.08 on each of the game’s 50 fixed paylines – they’ll have a shot at landing a progressive jackpot prize that could be worth a small fortune. Even if they decline this incentive, however, the game still boasts a fairly sizable top award of 50,000x players’ line bet.

Boasting a short animated intro that depicts a gentle giant being showered with golden coins after he causes a nearby volcano to erupt, the game has a colourful cartoon theme that sees precious gems and stone carvings feature as its standard base game icons. The giant himself appears in two different stacked symbols, while a volcano bonus icon can be used to trigger an additional feature.

Being a game that boasts its own progressive prize pool, the most important thing players need to know about the Jackpot Giant slot is how to trigger its top payout award. As outlined above, the jackpot can only be secured when the maximum wager of £4.00 is selected; and even then players will need to land five golden wild symbols on the game’s first payline to activate it, making it a fairly “tall” order.

Fortunately, five wild symbols in a row on any of the other 49 paylines will still award a massive prize of 50,000x – and an extra bonus icon can also be used to trigger a special pick-and-click feature. When this symbol appears on reels one and five simultaneously, mobile slots players will be transported to a new screen where they’ll get three picks from six volcanoes as they attempt to locate instant cash prizes.

If players are lucky, they’ll earn an extra pick to further boost their prize money – but if fortune really smiles on them, they might just uncover “Win All” and receive a reward for all six volcanoes.

One of the fairer progressive prize pool titles in the Playtech range, the Jackpot Giant slot enables players using all levels of bankroll to get their hands on huge jackpot payouts and other rewarding bonuses.

You can also play the Jackpot Giant slot machine at these mobile slots sites: