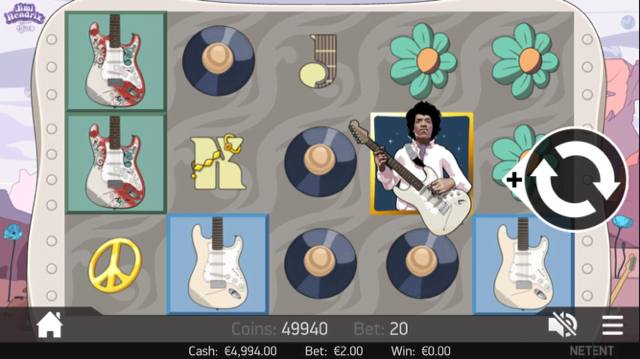 Following hot on the heels of the hugely successful Guns N’ Roses release, the Jimi Hendrix slot machine is the second game in the NetEnt Rocks! series and picks up where its predecessor left off by providing another perfect slice of rock n’ roll nostalgia based on the legendary guitarist.

Featuring five reels, 20 paylines and some of the trippiest visuals you’re ever likely to witness in a mobile slot, Jimi Hendrix provides an assault on all the senses courtesy of its psychedelic symbols and awe-inspiring soundtrack. Unique icons to appear on the reels include peace signs, hearts, records and flowers, while the iconic axe-man himself also makes an appearance as the game’s substitute wild.

Playable from as little as £0.20 per spin across all mobile, desktop and tablet devices, where the Jimi Hendrix slot really excels is in bringing some of the late, great musician’s most recognisable works to an all-new audience. Iconic tracks like Foxy Lady, Voodoo Child and Crosstown Traffic all get an airing as players spin their way to a maximum line win of 400x and a plethora of interesting and varied features.

There Must Be Some Confusion…

Admittedly, there are so many individual bonuses in Jimi Hendrix that it gets a little hard to know where to start when reviewing it. Essentially, however, all of the main features can be accessed from the Pick and Click screen, which is launched whenever scatters appear on reels three, four and five.

Whenever this happens, players will be prompted to pick from a selection of loudspeakers until they uncover four matching icons. These icons can award an instant cash prize of 8-30x their bet or a variety of free spin modes, each of which are named after a famous Hendrix song. Our personal favourite is the Purple Haze free spins, where players get up 12 bonus games with all lower value icons removed.

On top of this main feature, the Jimi Hendrix slot also includes a couple of in-reel bonuses to help players improve their bottom line – namely the Purple Haze Feature and the Red Guitar Re-Spins. The former sees all playing card symbols transform into wilds whenever the Purple Haze icon appears on the first reel, while the latter awards potentially unlimited re-spins so long as red guitar icons continue to land.

Living Up To The Legend?

As far as music-themed slots go, Jimi Hendrix pays a fitting homage to the legendary guitarist and provides players with a great variety of features as they shred along to some of his most famous hits.

You can also play the Jimi Hendrix slot machine at these mobile slots sites: