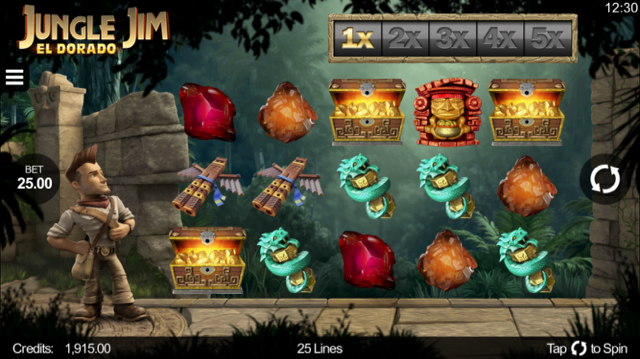 Set to a backdrop of Aztec ruins, the Jungle Jim El Dorado slot machine gives players the chance to join the titular explorer on his quest to find the mythical city and… wait, didn’t we already review Gonzo’s Quest?

While we know most slot themes have been done to death by software providers these days, Microgaming really have taken the biscuit – or at least the golden idol – with Jungle Jim El Dorado. The game is essentially a like-for-like copy of NetEnt’s classic block-busting slot, with everything from the setting to the animated hero and the Rolling Reels system to the prize multiplier being ported.

Taken on its own merits, the Jungle Jim El Dorado slot is still a perfectly fine game that can be enjoyed from as little as £0.25 per spin across all desktop, mobile and tablet devices, but that doesn’t mask the fact that it offers absolutely nothing new on Gonzo’s Quest. The slot does, however, offer a top prize award of 92,000 coins, with this coming as a result of the increased prize multiplier during free spins.

With Jungle Jim El Dorado being both thematically and aesthetically similar to NetEnt’s classic video slot, it should perhaps come as no real surprise that the gameplay and bonus features are also identical. As with the Avalanche Reels in Gonzo’s Quest, Jungle Jim features Rolling Reels which see any icons that feature in winning paylines disappear from the board to be replaced with new ones.

For every subsequent win created in this manner, a special prize multiplier will increase by one up to a maximum level of 5x. This becomes increasingly important during the slot’s free spins feature, which is triggered whenever three mysterious scatter symbols appear on reels two, three and four.

This will automatically award players with 10 bonus games with an improved multiplier metre in play throughout. Rolling Reels wins created during these free spins will begin at 3x their regular value and increase all the way up to a maximum level of 15x – and yes, the eagle-eyed among you will have noticed that even those numbers are exactly the same as the ones already used in Gonzo’s Quest!

Listen, we’re not saying that the Jungle Jim El Dorado slot is a bad game – far from it – but there’s a difference between putting your own spin on a classic title and copying it pixel for pixel and we think Microgaming have over-stepped the mark here. As such, we cannot really praise them for the game’s overall quality.

You can also play the Jungle Jim El Dorado slot machine at these mobile slots sites: