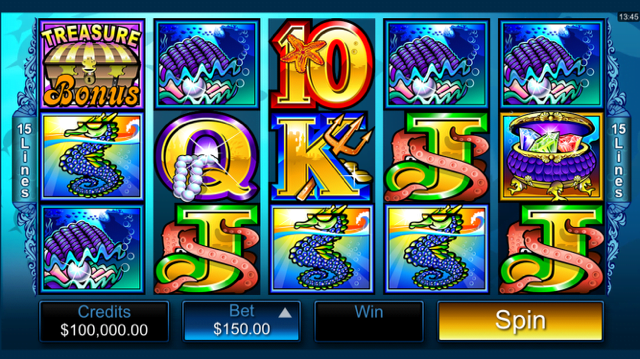 Take your video slot experience back to basics with Microgaming’s Mermaids Millions slot machine – a bizarrely unpunctuated title from the popular software provider that has become something of a cult classic.

Featuring five reels and 15 paylines, Mermaids Millions doesn’t attempt to reinvent the wheel with its bonus rounds, but rather places a much bigger emphasis on fun and fast-paced gameplay. Spins occur at a phenomenal speed and allow players to get through more games in a shorter space of time, while the unique symbols to appear on the reels include clams, seahorses and sunken treasure.

Playable from as little as £0.15 per spin with all paylines enabled, the game’s titular mermaid appears as a scatter symbol that can trigger the free spins feature, while a treasure chest will also whisk players away to a pick-and-click bonus. Couple those two incentives with a merman substitute wild and you have a game that packs a lot of prize punch into a relatively uncomplicated interface.

The Wetter The Better

Dealing with the bonus features in order of significance, the free spins game is undoubtedly the pearl in Mermaids Millions’ oyster. Triggered whenever three or more mermaid scatter symbols appear anywhere on the reels, players will initially be awarded ten free spins and a 3x multiplier. Land three more mermaids, however, and they’ll be able to prolong the feature with 10 more spins.

Somewhat of a secondary feature, the pick-and-click bonus is activated whenever three or more treasure chest symbols appear on a valid payline starting from the left-most reel. Should this happen, players will be taken to a new screen where they’ll get to pick from a selection of chests to uncover instant cash prizes – and the good news is this bonus can also be triggered during free spins.

Finally, the Mermaids Millions slot benefits from a couple of additional payout options that – although not groundbreaking – are at least worth mentioning. Firstly, the merman symbol will substitute for any icon other than the bonus or the scatter and secondly, landing any two scatters will double your bet.

Although it’s starting to look like something that’s been dredged up from the ocean floor, the Mermaids Millions slot is still a highly playable game that is both incredibly fast-paced and immensely rewarding.

You can also play the Mermaids Millions slot machine at these mobile slots sites: