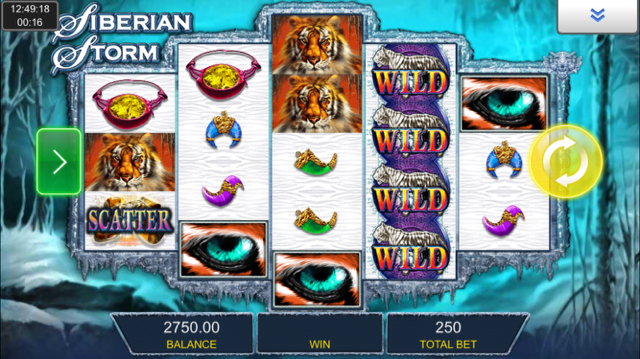 While it has since become something of an institution among IGT-powered video slots, the Siberian Storm slot machine was actually one of the first titles to use the providers’ now-legendary Multiway Xtra system.

For those unfamiliar with the wagering technology, Multiway Xtra is a payout system that awards prizes for any three matching symbols of consecutive reels, regardless of whereabouts on the gameboard they appear. The same symbol in the same column as part of a winning payline, meanwhile, will multiply your payout, with this feature ultimately creating 720 ways to win in total.

With the game featuring five reels in an unconventional 3-4-5-4-3 hexagonal formation and a range of unique symbols that include the game’s logo, orange and white tigers and various coloured jewels, the Siberian Storm slot can be enjoyed from as little as £0.25 per spin. A bonus feature also allows players to get their hands on 8-96 free spins initially, with a maximum of 240 available via retriggers.

The Hunt Is On

In order to activate this potentially lucrative free spins feature, mobile slots players will have to land at least one tiger’s eye symbol on each consecutive reel. Although this is admittedly quite tricky, players will receive a minimum of eight bonus games and can potentially land far more if multiple icons appear.

Naturally, the presence of IGT’s Multiway Xtra wagering system during the free spins means that players can often get their claws into multiple payouts – but if that alone is not good enough, the even better news is that free spins can be retriggered by landing five additional tigers’ eye symbols.

To give the game a final extra flourish, stacked wild symbols will appear across reels two, three and four during both base game spins and those played during the bonus feature. Potentially filling their entire columns, these symbols have the ability to create combination wins that greatly exceed the slot’s stated base game jackpot of 1,000x, further improving the game’s Return To Player statistic.

Tiger In The Tank?

A great introduction to IGT’s range of Multiway Xtra slots, the Siberian Storm slot is a game that offers a relatively consistent return on investment as well as the possibility of landing the occasional big win.

You can also play the Siberian Storm slot machine at these mobile slots sites: