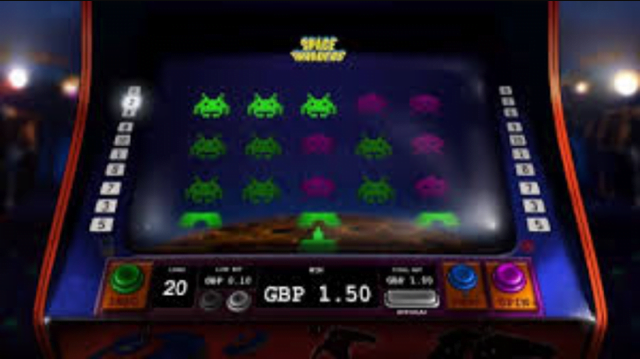 With the alien hordes arriving, the fate of the galaxy lies in your hands in Playtech’s Space Invaders slot machine – a classic five-reel, ten-payline title based on the intergalactic shooter created by Tomohiro Nishikado.

Undoubtedly one of the most iconic video games of the late 70s and early 80s, the Space Invaders slot picks up where the arcade cabinet left off by recreating the same retro visuals and sound effects from the original title in an all new setting. With pixelated “invaders”, UFOs and planets featuring on the reels, all the favourites from your childhood are present alongside the game’s legendary cannon.

Playable from as little as £0.10 per spin, Space Invaders is a game that can be enjoyed across all desktop, mobile and tablet devices and further benefits from the fact that wins can be landed from both left-to-right and right-to-left. Although a maximum jackpot of 150x is unlikely to send your bankroll into orbit, all winning paylines that are completed with the help of a substitute wild are worth twice as much, while a special wild re-spin is also capable of creating huge prize combinations.

While it would be generous to say that the Space Invaders slot features any bonus rounds per se, the aforementioned cannon hovers beneath the reels to blast any marauding martians into smithereens. On each spin, the cannon will move back and forth beneath the reels and – should it stop below the second or fourth ones – any invader icons that complete a win will be shot and replaced with wilds.

On top of that there’s also a randomly activated UFO Wild bonus that can be triggered during any base game spin. When this happens, the cannon will lock onto a UFO above the gameboard and unleash a powerful laser, with a number of wilds dropping down onto the reels. Up to nine wilds can be released in this manner, with a free re-spin then taking place to create multiple winning paylines.

As mentioned above, all wins that are created with the help of a wild symbol are doubled in value, so when either of the two bonuses occur, the cash returned to players can potentially be astronomical.

Although a relatively simple game that is lacking in both free spins and bonus features, Space Invaders is loaded with enough nostalgia value to make it well worth a pocketful of anyone’s change.

You can also play the Space Invaders slot machine at these mobile slots sites: