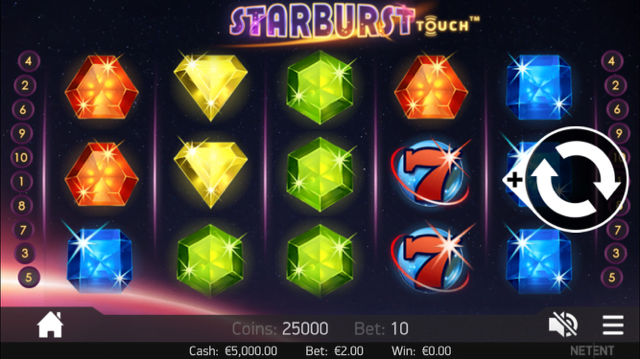 Undoubtedly one of the most popular video slots ever invented, those of you out there who are still unfamiliar with NetEnt’s Starburst slot machine may be surprised to discover that the game is staggeringly simple.

Featuring five reels and ten adjustable paylines that award prizes from both left-to-right and right-to-left, the slot doesn’t boast so much as a scatter symbol or a free spins feature to detract from its addictive base game experience. Instead the game relies on unique expanding “Starburst” wilds that appear on the three central reels to provide a series of free re-spins where huge wins are possible.

Although the game is visually uncomplicated – with a selection of colourful gemstones accounting for its unique icons – a series of awesome “combo” animations and a space-age soundtrack make the Starburst slot a thoroughly exhilarating user experience. What’s more, the game can enjoyed from as little as £0.10 per spin with all ten paylines enabled across any desktop, smartphone or tablet device.

The reason for Starburst’s huge popularity since its release is the game’s simple yet highly effective bonus feature. Whenever a Starburst wild symbol appears anywhere on reels two, three or four during a base game spin, not only will the icon expand to fill its respective column and payout for any winning combinations that are created, but it will also remain locked in place for one re-spin.

Naturally, this will create further opportunities for players to string together back-to-back wins, but if they’re lucky enough to land a second Starburst wild, this process will repeat itself for another re-spin. It is therefore technically possible to be awarded a total of three re-spins, with this effectively turning all three of the game’s central reels wild to guarantee at least a bunch of four-of-a-kind wins.

The upshot of having completely wild reels and lines that pay in both directions is that the Starburst slot is capable of awarding a maximum prize of 50,000 coins on any base game spin, with this substantially boosting the game’s return to player statistic and ensuring its cult status among all video slot fans.

Although a deceptively simple title from NetEnt, Starburst is thoroughly deserving of its lofty reputation among slot fans due to its fast-paced gameplay and huge payout potential on any spin.

You can also play the Starburst slot machine at these mobile slots sites: