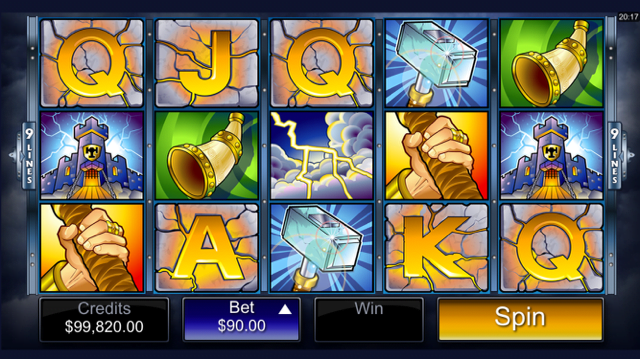 Undoubtedly one of the most recognisable video slots of all time, Microgaming’s Thunderstruck slot machine is a simple five-reel, nine-payline game with a Norse mythological theme that dates back as far as 2003.

Featuring a range of striking symbols including Thor, his legendary hammer, a bolt of lightning and an ornate horn, the game still looks pretty impressive despite its years of service and a dramatic soundtrack that includes foreboding drums and howling winds keeps the action exciting throughout.

Playable from as little as £0.09 per spin across all desktop, mobile and tablet devices, the game is suitable for players on all bankrolls and offers a sizeable top award of 10,000x their chosen line bet. Further profits can also be accrued in a free spins bonus where all winnings are trebled and via the game’s gamble feature, which allows players to double or quadruple their prizes up to a stated limit.

A Storm Of Spins

As a relatively dated video slot, there is only one bonus feature in Microgaming’s Thunderstruck slot – and it is a simple one at that. Activated whenever three or more ram scatter symbols appear anywhere on the gameboard, players will first receive a prize payout of between 5x and 500x their total bet and then be awarded 15 free spins during which the value of all paylines is worth 3x more.

Further bonus games can be secured by landing three or more subsequent ram scatters, while the game’s Thor wild symbol will also double the value of any winning paylines that it features in; potentially making players’ wins worth 6x the amount stated in the standard base game paytable.

Any winnings earned during free spins or in the regular game can also be doubled or quadrupled in a simple card-picking feature. This mini-game allows players to gamble on the colour or suit of the next card to be revealed up to a maximum limit, with an incorrect guess forfeiting their entire prize.

While the Thunderstruck slot is certainly a little dated in terms of its gameplay mechanics and simple features, the slot still looks remarkably spritely for its age and is well worth a nostalgic spin or two.

You can also play the Thunderstruck slot machine at these mobile slots sites: