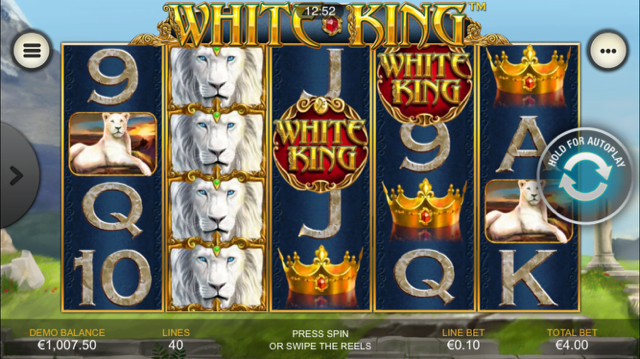 The game features a striking wildlife theme that depicts the majestic white lion in all his glory alongside an equally regal-looking lioness and a litter of cute cubs. A golden crown acts as the slot’s most valuable regular icon, while the White King logo is a scatter symbol that can be used to trigger five bonus games and the aforementioned apex predator appears as a stacked wild across all reels.

Featuring 40 adjustable paylines and five stacks of symbols, the White King slot is a game that can be played for as little as £0.01 per spin across all desktop, mobile and tablet devices; but the fact that the maximum stake limit in the game is a whopping £2,000 means this is one all-action slot that can be enjoyed by all players, irrespective of where they currently feature on the video slot food chain.

Born To Be Wild

As mentioned above, White King is a relatively straightforward video slot that benefits from two major gameplay additions; only one of which can truly be counted as a “feature”. Dealing with the… ahem… “mane” attraction first, players will receive five free spins whenever the game’s logo appears anywhere on reels two, three and four at once, with players able to re-trigger this bonus infinitely.

The other notable aspect of the slot is that the titular White King appears as a stacked wild symbol across all five base game reels. Naturally, this not only makes it far easier to complete winning paylines, but with the symbol awarding 1,000x for five-of-a-kind, it also boosts your bottom line too.

These stacks of wilds become even more valuable during the free spins feature, as more symbols are added to the reels to further boost the odds in players’ favour. This naturally has a significant impact on the game’s overall return to player statistic and makes it far easier to land substantial bonus wins.

Although a fairly basic title by modern standards, the White King slot is still an incredibly playable title from Playtech that foregoes having a plethora of features in favour of providing consistent bonus payouts.

You can also play the White King slot machine at these mobile slots sites: